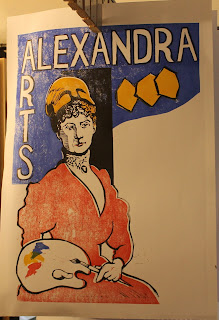 Channeling my inner Toulouse-Lautrec this time. Still working on the idea I used for the postcard print I did earlier. This one's A2 size with space to write our "what's on" down the right hand side.

Alexandra is certainly a challenge - it's taken so many tries to get a face I'm happy with. This one's pretty good I reckon. Still struggling with the pub sign, though.

As time goes by I can print these using different colours so people can see at a distance when things change.

Posted by Steve Davies at 02:18 No comments: 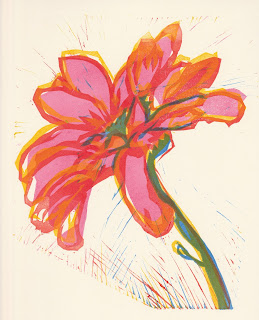 This is the third of the Bent Flower prints I did for Warwickshire Open Studios. I wasn't sure I'd get a third one done before close of play yesterday, but I hadd a big push and didn't wait for the inks to dry properly. I'm pretty happy with the results.

I quite like the graphic/not-graphic thing that I've got with these prints, through not using a proper key block. My original drawings werre done quickly in crayon, and I wanted to maintain that vibe in the prints. Here's the drawing for this one. 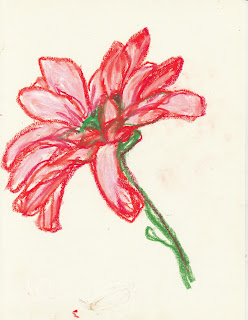 It's been an interesting exercise, and it's given me an insight into the technical and emotional processes of my work and has helped somehow to cleanse my mind. I also feel I've taken on the WOS scene on its home ground and acquitted myself well. I'm happy.

Posted by Steve Davies at 22:19 No comments: 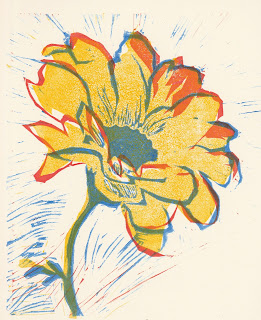 Doing these flowers has been quite liberating. It has somehow given me an empty space, a void where I can nonetheless be me. It has allowed me to see the energy, the tension that goes into my work.

There was a category in this year’s Open Studios called, “Beautiful Botanicals” and they posted a video the other day of artists who had put themselves in this category. It was interesting to see the stuff gathered there, a feast of vegetable porn. There were a couple of things that looked like the outcome of some sort of fight, but most did nothing for me. So I’m glad I’m doing this. It’s a bit like invading somebody else’s territory. You have no idea what the “right thing to do” is, so you end up parking your tank on somebody’s lawn. A great faux pas.

Having written the previous blog, I followed my own link to Tat R’s web site and discovered he has an exhibition at Victoria Miro’s gallery entitled “Untitled Flowers.” Here’s a transcript of part of the video publicising the show.

“I think the worst thing a painter can do is flowers. I mean if somebody would have told me ten years ago, “One day you’re going to paint flowers,” I’d have been very embarrassed. Flowers in some ways are so banal. You pick them up, you put them in some kind of pot, then they fall down and then you throw them out. Today I would say it’s just too good to be true, And I think the older you get, you understand the possibility of banality. That sometimes you walk into something that is banal. It’s much better than to walk into something that on the surface is very complex.

“What does it mean to draw a flower? It actually means you try to understand, try to organise. But that’s almost impossible, because there’s just too much information. There’s too much information in anything you look at, beside the white wall, So you try to organise. But organise according to what? And I think the worst thing an artist can do is organise just according to aesthetics, That’s a wrong turn. It’s understandable an artist would organise the world according to aesthetics, but it’s wrong. You actually have to organise it, as strange as it sounds, according to something that has nothing to do with flowers. It can be organising flowers according to other experiences, memories you have in life. So that means to make art is always a kind of a carnival. You dress up the world to be able to walk into it.“

This is just so right. And we all know that organising the world according to aesthetics only leads to fascism. Hope I can find time to see this exhibition.

Posted by Steve Davies at 12:06 No comments: 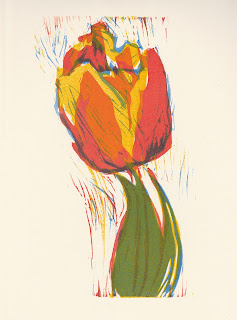 Tal R says something along the lines that amateurs are right when they choose subjects that are rejected by serious artists. Flowers, say. It helps bring the viewer into the work. “Oh its a flower. I know flowers.” It enables them to take the first step on to the dance floor. But the trick is to bend your subject towards what you are trying to say.

When we did a whole term on flowers in Eric Gaskell’s class, I was delighted. I’m not a person who is naturally in sympathy with flowers, so I relished the opportunity to get to grips with their colourful blousiness.

During that time I learned two things about flowers:

1. Most of them are twisted and deformed, just like the rest of us;

2. They move. So you can’t hang around too long when making your drawing.

For Warwickshire Open Studios this year I decided to go back to the drawings I did that term and use some as the basis for some prints.

This tulip is the first one. A flower tortured by me looking at it. I think I’ll manage at least one other before next weekend is out.

Posted by Steve Davies at 11:38 No comments:

In advance of Open Studios

Warwickshire Open Studios is fast approaching. The event proper (Summer Art Weeks) will take place between 18th June and 3rd July. We will be open at the Alex on the 3 Saturdays and Sundays and the 2 Fridays.

As an advance taster aroud 100 WOS arttists are exhibiting in the Litten Tree Building in Coventry from 2nd to 11th June. My Godiva of Coventry print is there, too, The exhibition's on the 4th floor (I think), so be prepared for a climb.

Posted by Steve Davies at 00:21 No comments:

Email ThisBlogThis!Share to TwitterShare to FacebookShare to Pinterest
Labels: Exhibitions My studio is now moved into the Alex. Still needs some tidying up but my little corner is pretty much ready for this year's Open Studios. Just have to get the rest of the place sorted now. Did a bit of test printing last night, too.

Posted by Steve Davies at 03:11 No comments:

Email ThisBlogThis!Share to TwitterShare to FacebookShare to Pinterest
Labels: Studio

Reasons I have been so quiet lately #2: Alexandra Arts 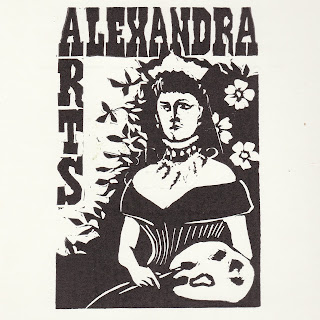 This is the big reason, really. My wife and I have bought the former Alexandra Tavern/Arms in Rugby. And aim to open it as a Cafe/Gallery, plus studios, plus teaching space, plus… We’ve spent the last month working on it as best we can with no money. But hey, we’re artists.

The print above is my first attempt towards a sign or logo. I liked the idea of Alexandra painting. I added the Alexandra Roses as a nod to her good works. I did also toy with the dea of Edward VII posing nude… but maybe not… yet.

Posted by Steve Davies at 09:23 No comments:

I used to collect statistics for the State. Such are my sins. But now I create art. By way of atonement.
This blog is where I'll talk about my printmaking and art. I'll be adding pieces here and talking
about them as and when I make them.
The archive of my past research work is still here, but will eventually (I hope) form the alluvial silt beneath the current flow of my life.